eMaps European modules are now free to access! View our available modules and use code "FREEMAPS" at checkout. 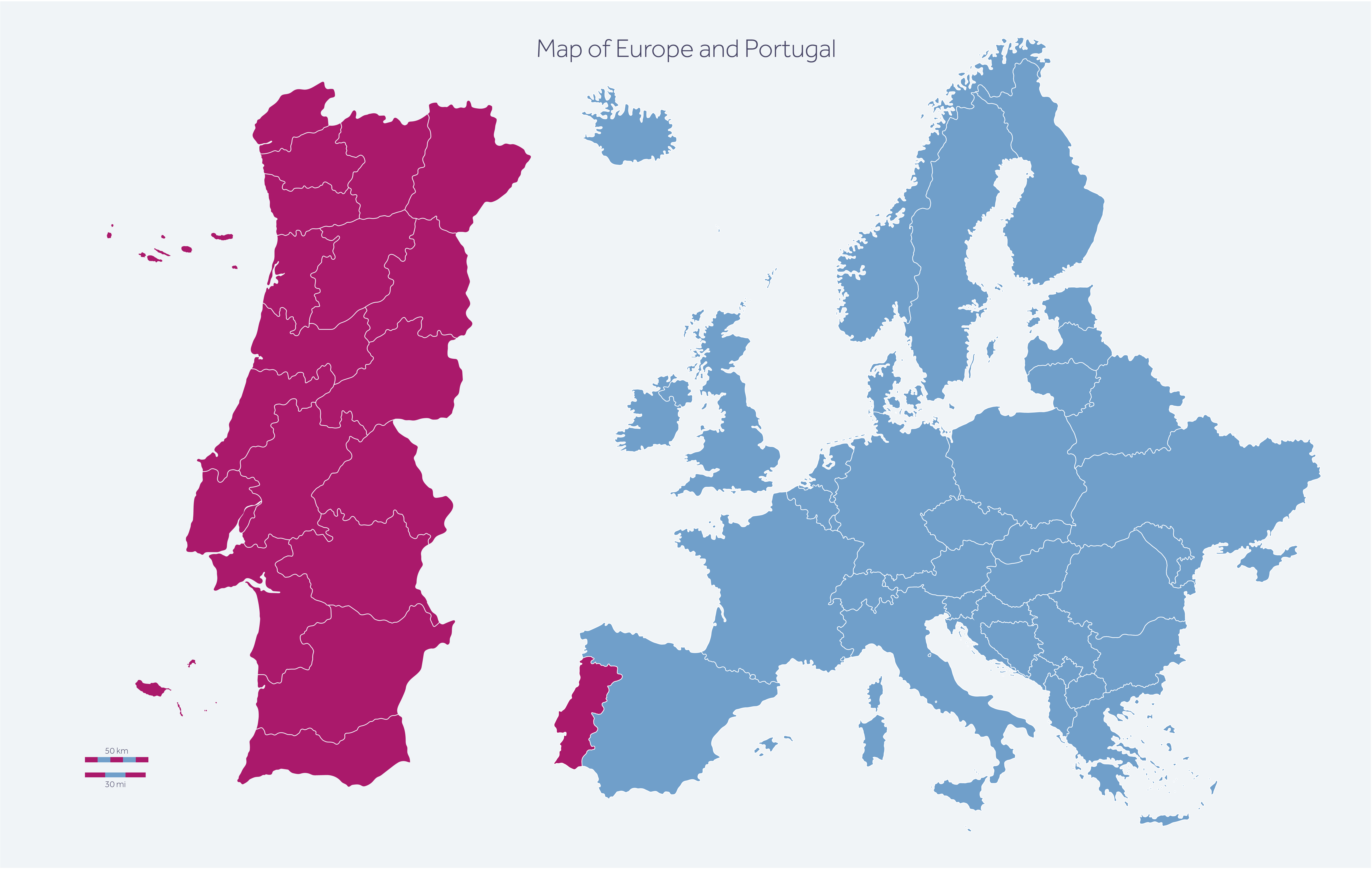 Mainland Portugal is geographically situated on the west coast of Europe on the Iberian Peninsula. It borders the north and east with Spain, the West and the South with the Atlantic Ocean, in a geostrategic position between Europe, America and Africa0.

Beyond the Continent, the Portuguese territory also includes the Autonomous Regions of the Azores and Madeira, two archipelagos located in the Atlantic Ocean 0.

The stability of continental borders, virtually unchanged since the 13th century, makes Portugal one of the oldest countries in the world, with nearly nine hundred years of history, and reflects its marked identity and internal unity 0.

Portugal is a country with almost 10.3 million inhabitants, about 50% is considered an active population. The distribution of population across the continent’s territory shows a concentration next to the coastal strip, where two areas with particularly high densities, centred on the cities of Lisbon (the capital of Portugal) and Porto 0.

Portugal has a prime location to access relevant markets!

For more information about the points mentioned previously, consult this link.

An important slice in Portugal’s economy is the health sector. Health expenditure as a percentage of Gross Domestic Product (GDP) decreased between 2010 and 2015 period from 9.8% in 2010 to 8.9% in 2015 (image below)0. Moreover, considering the Pordata0” additional=”” authors=”World Health Organization. Health System Review Portugal.” /], the values of health expenditure as a percentage of GDP for 2016 and 2017 are equal to the 2015 value.

Health expenditure as percentage of GDP

Health has been given greater importance in recent years as an economic driver, the health status of individuals affects not only their physical and psychological well-being but also their economic situation.

The Portuguese health system draws on a mix of public and private financing when the National Health Service (NHS) is predominantly financed through general taxation.

It is really important that innovators understanding the geopolitical landscape of Portugal and the crucial role played by healthcare and the national health service. Some relevant points about the current status of Healthcare Funding in Portugal 0, 0:
− The Ministry of Health receives a global budget for the NHS from the Ministry of Finance, which is then allocated to the several institutions within the NHS.
− The Ministry of Health allocates funds to the health regions, based on a combination of historical expenditure and capitation, which pay for primary care and specific health programmes.
− A budget for the total NHS expenditure is established within the annual government budget.
− The NHS can be characterised as public insurance, with universal, equitable, low-cost coverage for the user when providing the service and financed by taxes and fees 0.
− The Portuguese health system is made up of the National Health Service, voluntary and private health insurance, and health subsystems generally associated with professional activity 0.

Key Observations about the NHS in Portugal

Through the Portuguese Law n.o 56/79 0, published in Diário da República on the 15th of September, a network of institutions and services providing comprehensive healthcare for the entire population, financed through taxes, was established in which the State safeguards population´s right to health protection 0. In 1979 the public healthcare system was established in Portugal, a universal tax-financed system, delivered through the Portuguese National Health Service (NHS).

“The National Health Service is the set of institutions and services, dependent on the Ministry of Health, whose mission is to ensure that all citizens have access to health care within the limits of available human, technical and financial resources. The NHS also establish contracts with private sector providers in order to provide NHS patients with specific health care services guaranteeing the access rights of users in ways similar to those offered by the NHS” 0.

The NHS is available to all residents and covers all of mainland Portugal. The autonomous regions of the Azores and Madeira have set up separate Regional Health Services (SRS) of the NHS, under the management of their regional governments.

The Portuguese health care system is characterised by three coexisting and overlapping systems:
− The universal NHS;
− The health subsystems, health insurance schemes for which membership is based on professional/occupational group and company;
− Private Voluntary Health Insurance (VHI).

The Guiding Principles of the NHS Constitution

The current Framework Health Law 0 establishes in its Base XX the following guiding principles of the Portugal NHS:
a) Be universal, ensuring the provision of health care to all persons without discrimination, in conditions of dignity and equality;
b) Be general, ensuring the necessary care for health promotion, disease prevention and the treatment and rehabilitation of patients;
c) Tending towards free health care services for users at the point of delivery, taking into account the economic and social conditions of the citizens;
d) Integration of care, ensuring that the NHS provision model is organised and works in an articulated and networked way;
e) Equity, promoting the correction of the effects of inequalities on access to care, paying particular attention to the needs of vulnerable groups;
f) Quality, aiming at effective, safe and efficient evidence-based healthcare, performed in a humanised manner, with technical correction and attention to the individuality of the person;
g) Proximity, ensuring that the entire country has rational and efficient coverage of health resources;
h) Financial sustainability for effective, efficient and quality use of available public resources;
i) Transparency, ensuring up-to-date and clear information on the functioning of the NHS.

You have already completed the component before. Hence you can not start it again.

You must first complete the following:

Component complete. Results are being recorded.

Designed & produced by Imageworks
Back to Top