eMaps European modules are now free to access! View our available modules and use code "FREEMAPS" at checkout.

Organisations and Structures in the Portuguese NHS

Organisations and Structures in the Portuguese NHS

Organisations and Institutions that comprise the Health System

The next scheme represents the relationships between the various bodies, organisations and institutions that comprise the health system. 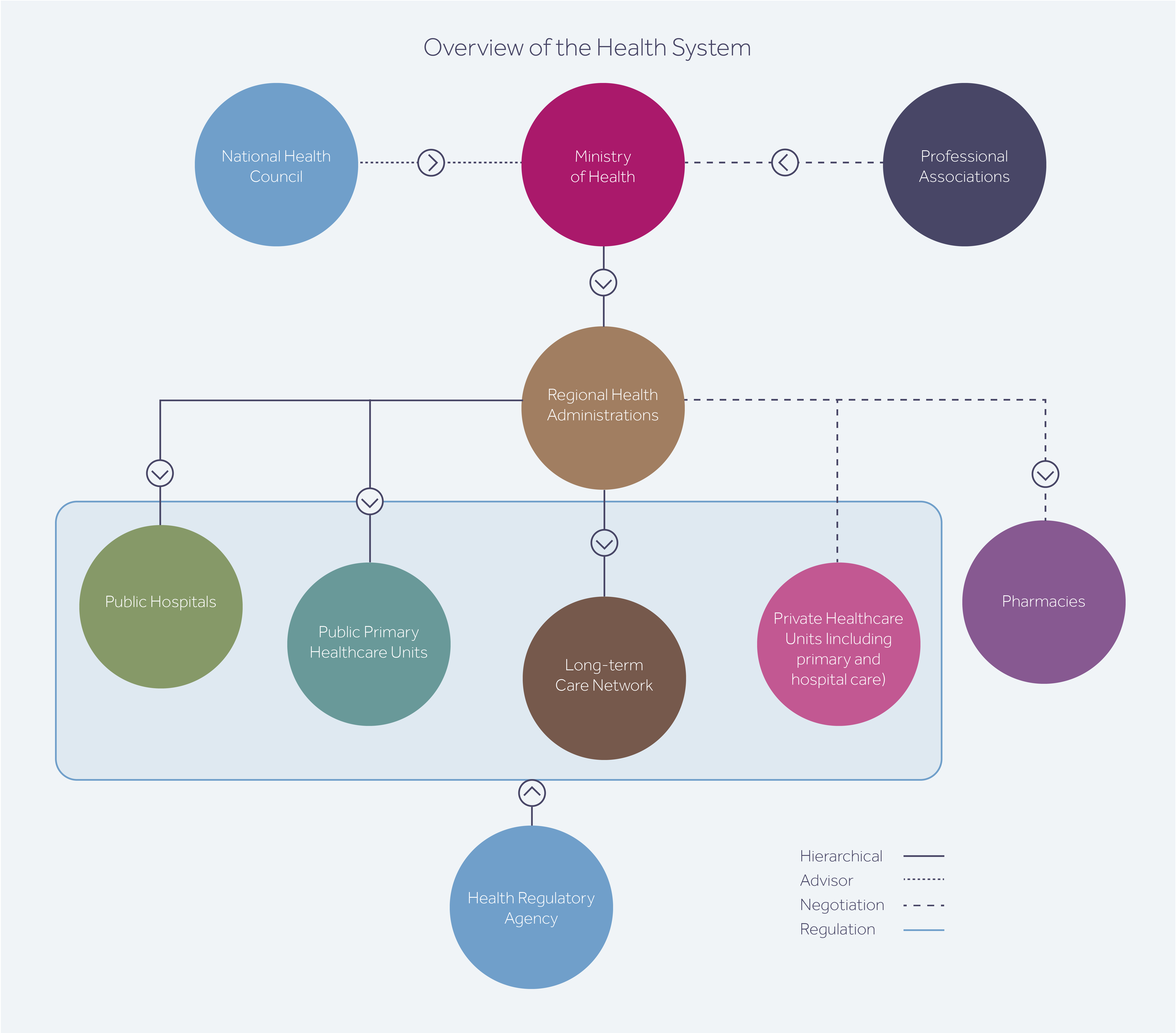 Organisations and Structure for the NHS

The scheme below defines the Organisational Chart of the Ministry of Health:

A brief introduction of each structural part is described below:

The core function of the Minister of Health is:

The two-state secretaries have responsibility for the first level of coordination, under delegation by the Minister of Health.

Secretariat-General for Health, SGH (Secretariado-Geral da Saúde, SGS)
The SGH provides and gives:
− Technical and administrative support to the other sections of the Ministry coordinates their work and provides assistance to staff within various government offices;

− Support to other institutions, services and bodies not integrated within the NHS, concerning internal resources, legal advice, information and public relations.

The Inspectorate-General of Health-related Activities is responsible for the audit, supervision, and disciplinary function in the health sector, both in NHS institutions and services and in private institutions.

The DGH:
− Plans, regulates, directs, coordinates and supervises all health promotion, disease prevention and health care activities, institutions and services, whether or not they are integrated into the NHS;
− Is responsible for public health programmes, quality and epidemiological surveillance, health statistics and studies.

The DGIABD promotes the reduction of both legal and illegal drugs consumption, the prevention and treatment of addictive behaviours, and the decrease of dependencies.

Central Administration of the Health System, CAHS (Administração Central do Sistema de Saúde, ACSS)
The CAHS is responsible for:
− The management of financial and human resources, facilities and equipment and systems of the NHS;
− The implementation of health policies, regulation and planning, along with Regional Health Administrations (RHAs), namely in health service contracting.

ADSE is a public institute of participatory management, integrated in the indirect administration of the State, with the double responsibility of the Ministry of Health and the Ministry of Finance, endowed with administrative and financial autonomy and own assets.

The purpose of ADSE, I.P.’s mission is to protect its beneficiaries – workers with public employment legal relationship and retirements, and their families – in the areas of health promotion, disease prevention, treatment and rehabilitation.

The NHS, although centrally financed by the Ministry of Health, has had a strong regional structure since 1993 comprising five health administrations across Portugal: North, Centre, Lisbon and the Targus Valley, Alentejo and the Algarve.

Five health administrations across Portugal: North, Centre, Lisbon and the Tagus Valley, Alentejo and the Algarve. 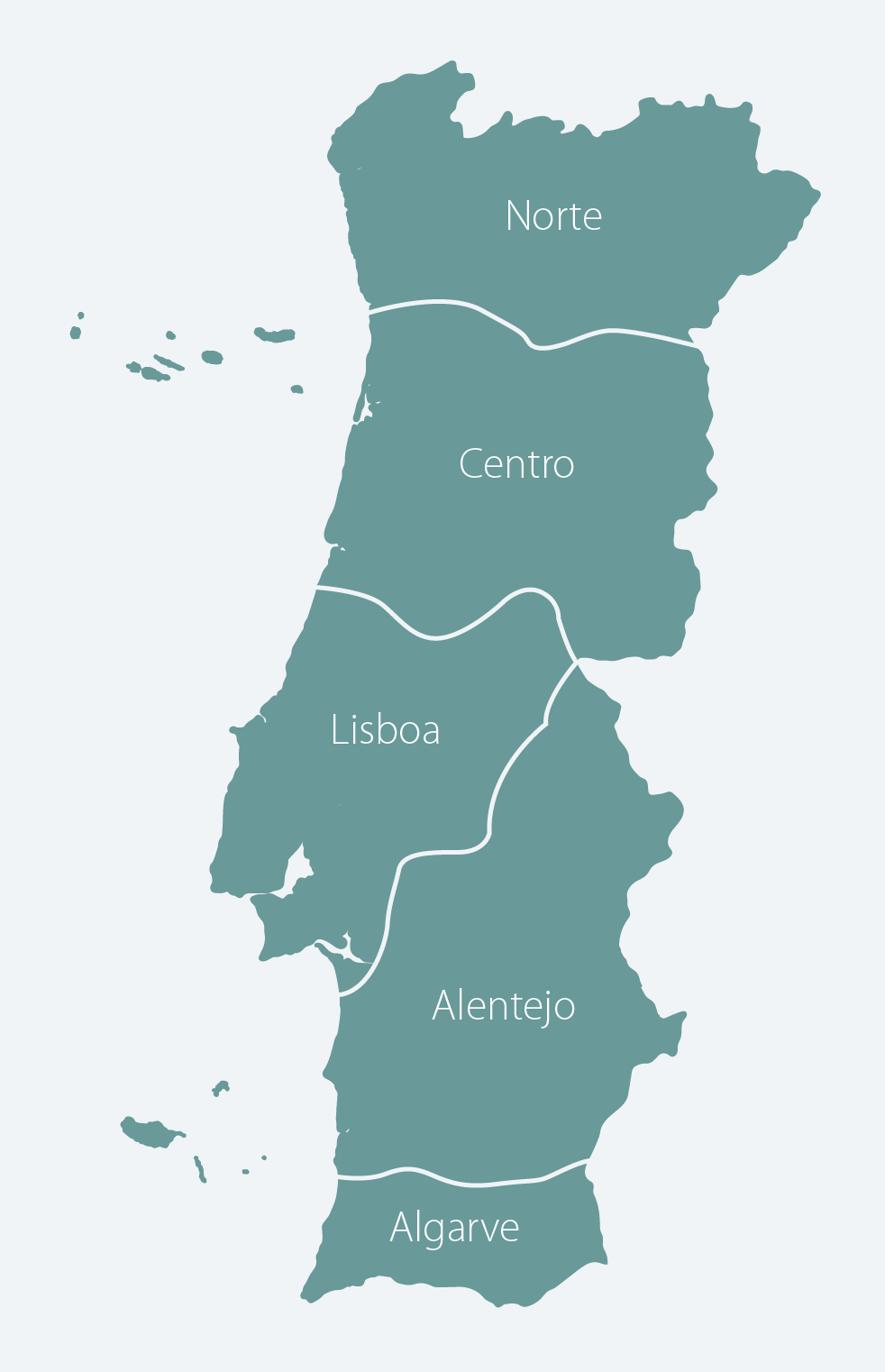 They work in accordance with principles and directives issued in regional plans and by the Ministry of Health. Their main responsibilities are the development of strategic guidelines; coordination of all aspects of health care provision; supervision of hospitals and primary care management; establishment of agreements and protocols with private bodies; and liaison with government bodies, religious charities (for example Misericórdias), other private non-profit-making bodies, and municipal councils.

They are also in charge of the development of a long-term care network.

The Portuguese Institute for Blood and Transplantation:
− Assures quality and safety regarding donation, analysis, processing, storing and distribution of human blood and blood components, as well as human organs, tissues and cells;
− Regulates, at a national level, the pharmaceuticals related to transfusions and assures stock levels of blood and blood components are available when needed.

It is responsible for conducting, coordinating and promoting health research at the Ministry of Health. It also has the objective of producing evidence for policy and action in public health.

NIME is the body of the Ministry of Health responsible for coordinating the operation, in the territory of mainland Portugal, of an Integrated Medical Emergency System, in order to guarantee to the victims of accidents or victims of sudden illness the prompt and correct health care.

The main tasks of the NIME are to provide relief at the scene, the assisted transport of the victims to the appropriate hospital and the articulation between the several actors in the system.

These are public institutions without an enterprise status and continue to be managed by civil service rules.

Shared Services – Ministry of Health, SSMH (Serviços Partilhados do Ministério da Saúde, SPMS)
The SSMH provides specific shared health-related services in matters of purchasing and logistics, financial management, human resources, information and communication systems, and other supplementary and subsidiary activities to organisations that are part of the NHS, irrespective of their legal nature, as well as to bodies and services of the Ministry of Health and any other organisations, as long as they carry out specific activities in the health field.

Organisational model created to improve coordination between primary care and hospitals, through vertical integration of different levels of care. There are eight local health units in Portugal: Matosinhos, Northern Minho/Viana do Castelo and Northeast/Bragança (North); Guarda and Castelo Branco (Centre); and Southeast/Portalegre, Southern/Beja and Coastal/Santiago do Cacém Alentejo (Alentejo).

Bodies related to health care that does not belong to the Ministry’s administration, either directly or indirectly

National Health Council, NHC (Conselho Nacional de Saúde)
The NHC is the consultative body for the Ministry of Health, which is responsible for issuing recommendations and advice on measures to enforce the implementation of health policy objectives.

For more information about the structural part of the NHS consult the
NHS Portugal website 0 (Portuguese link).

Besides these entities, there other, belonging to other ministries that will be relevant, the Social Security (Segurança Social).

Institute of Employment and Training

The Institute of Employment and Training belongs to the Ministry of Economy. The IEFP is the national public employment service. Its mission is to promote the creation and quality of employment and to combat unemployment through the implementation of active employment policies, including vocational training 0.

The National Health Plan continues the vision established in the previous plans, e.g., health gains by integrating sustained efforts in all society, and the use of strategies based on citizenship, equity and access, quality and policies 0.

The National Health Plan has the mission of 0:
− Asserting the values and principles that support the identity of the Health System, namely the National Health Service, and to strengthen the coherence of the system around them;
− Clarifying and consolidating common understandings that facilitate the integration of efforts and of the agents in the achievement of gains and value in health;
− Framing and articulating the various levels of strategic and operational decision-making around the objectives of the Health System;
− Creating and sustaining an expectation of the development of the Health System through guidelines and proposals for action;
− Being a reference and enabling the monitoring and evaluation of adequacy, performance and development of the Health System.

Primary Health Care 0, 0
Primary health care is the central pillar of the health system, assuming important functions of health promotion, prevention and care of the disease, continuity of care and articulation with other health services.

In recent years, the network of primary health care in the NHS has been reinforced and expanded through the creation of the groups of primary care centres (Agrupamentos de Centros de Saúde, ACES), who is primarily responsible in the public sector for providing primary health care. Each ACES has organisational independence and is composed of several units, which are integrated into at least one primary care centre.

A series of health care reforms, initiated in 1995/1996, have been carried out with a view to increasing accessibility, improve continuity of care, increase professionals motivation and improve quality, which has had a direct impact in primary health care provision, including:
− Implementation of local health units (since 1999);
− Development of information systems (mainly since 2007);
− Implementation of the Family Health Units (2007);
− Reconfiguration and autonomy of primary care centres, by creating the ACES (Decree-Law No. 28/2008, of 22 February 2008);
− Restructuring of public health services (2009).

Each of these functional primary care units is based on a multi-professional team with organisational and technical autonomy.

Family Health Unit (Unidade de Saúde Familiar, USF): a unit of health care, individual and family, based on a multidisciplinary team of doctors, nurses and clinical secretaries and that develops its activity with organisational, functional and technical autonomy, integrated into a network logic with the others units 0.

Personalised Health Care Units (Unidade de Cuidados de Saúde Personalizados, USCP): it has a structure similar to that USF, although in a more traditional model of personalized care, which still has to guarantee the accessibility of the users and the continuity of care0.

Community Care Units (Unidade de Cuidados na Comunidade, UCC): provides home and community health and psychological and social support, especially to the most vulnerable people, families and groups, most at risk or with physical and functional dependence or illness requiring close monitoring. Acts in health education, network integration, family support, the implementation of mobile intervention units and the RNCCI (Rede Nacional de Cuidados Continuados Integrados), through the integrated continuous care team. The UCC team is made up of nurses, social workers, doctors, psychologists, nutritionists, physiotherapists, speech therapists and other professionals.0

Public Health Units (Unidade de Saúde Pública, USP): acts as health observatory for the geographic area in which it is integrated, namely to develop public health information and plans, to carry out epidemiological surveillance, to manage intervention programs in the context of prevention, promotion and protection of the health of the general population or specific groups, and to collaborate, in accordance with their respective legislation, in the exercise of the functions of health authority. The USP team is made up of public health doctors, public health or community health nurses and environmental health technicians, also integrating, permanently or temporarily as deemed necessary, others professionals in the area of public health 0.

Shared Assistance Resource Units (Unidade de Recursos Assistenciais Partilhados, URAP): provides consulting and assistance services to other functional units and organises functional links to Hospitals. The URAP team is made up of doctors from various specialities other than general and family medicine and public health, as well as social workers, psychologists, nutritionists, physiotherapists, oral health technicians and other professionals not totally affected by other functional units 0.

The Hospital Health Care is part of health services aimed at ensuring the provision of specialised ambulatory care, inpatient care and emergency care with the objective of providing the population of a given geographic area with curative medical care.

Number of NHS hospital institutions in 2017 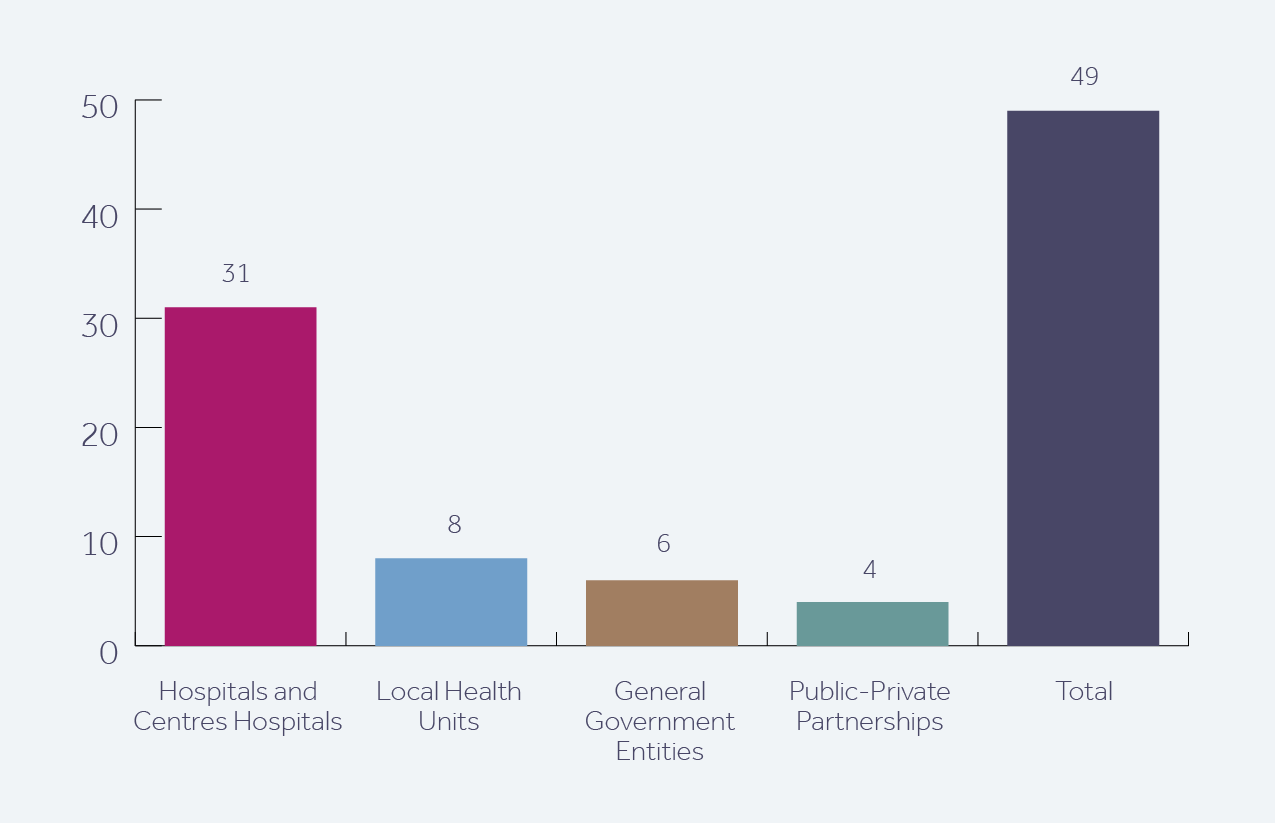 The Integrated Long-term Care is focused on the overall recovery of the person, promoting their autonomy and their functionality, within the framework of their dependency situation.

The National Network for Integrated Long-Term Care (NNILTC) has as main objectives the provision of health care and social support in a continuous and integrated way to people who, regardless of age, are in a situation of dependency and loss of autonomy.

The NNILTC is present throughout the continental territory, with different types of home care and inpatient care, and includes public, private and social sector institutions that provide integrated care in the field of health and social action to people in situations of dependency or loss of autonomy whose situation does not require hospital admission but requires different care from those provided in acute care units.

You have already completed the component before. Hence you can not start it again.

You must first complete the following:

Component complete. Results are being recorded.

Designed & produced by Imageworks
Back to Top